Inflation can’t be changed directly. In my previous discussion on the nature and effectiveness of the gauge weight voting mechanism, we learned that there are ways to use gauges in interesting ways. The method of inflation adjustment proposed here deals with additions to the gauge weight system.

People have been asking in the TG chat about reductions to CRV inflation. The rationale in all cases seems to be that inflation is unsustainably high, and has resulted in too much selling pressure/depressed token price. 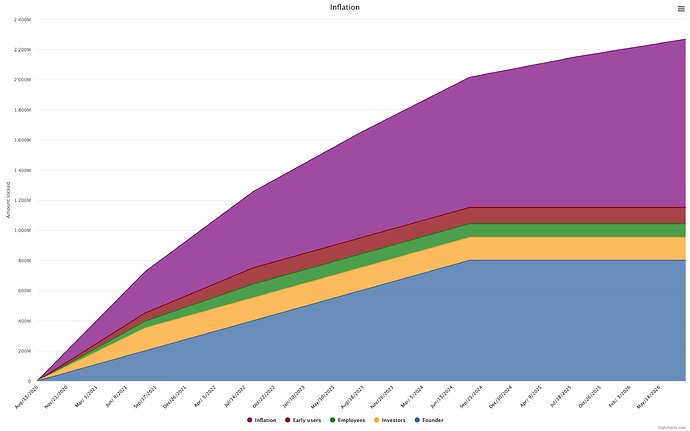 Inflation decreases annually until the total supply of 3,030,000,000 CRV is in circulation some 300 years from now. You can see from the graph above that the inflation slowly shifts the supply from core team dominance to community dominance. This team/community flippening occurs in about 4 years.

The gauge weight system currently allocates inflation to LPs in specific Curve pools. Gauges can also be made to serve other interesting functions like weighting inflation based on pool performance, or to give pools insurance coverage. Or, in this case, a gauge to simply burn new inflation.

Although a gauge could be made to burn inflation, it requires veCRV holders to regularly support this initiative. veCRV holders would need to vote to boost the burn rate rather than boost distribution to their favorite pools. It’s unclear whether voters would be inclined to burn rather than allocate to themselves, but a true democratic system that empowers veCRV holders requires that we give them the option to burn if they want to burn.

veCRV holders have the right to decide where inflation goes, including back to the fiery depths from whence it came.

Burning may not be in the interest of the community, which would effectively be handing control of the protocol back to the team (who we all appreciate very much, btw).

The signal vote is up at https://signal.curve.fi/#/curve/proposal/QmSTNah12jSXmYvWLAWGVXL4g2VJwJGDNmJnNXRtnKUTD4
(Fixed with active poll now!)

This is a well articulated proposal. The “against” makes it problematic for me: it can create more conspiracy and negative sentiment. IMO it is much better to introduce good token demand mechanisms which we and those projects who use Curve are actively working on.

In any case, I want to hear the opinion of the community, so I won’t vote in the signalling poll in order to see unobstructed opinions.

I’m against. CRV should belong to the future community. As painful as it is to see the price drop, I believe it’s more important to spread out the ownership and give the future a chance at healthier yields (healthier in overall DAO% vs more reserved for early insiders). Not everyone has been able to acquire a stockpile they’re happy with yet.

what is the profile of these people? LPs or founder/investor/employee/early?

Sounds difficult that LPs have asked for a reduction in supply that only impacts LPs and leaves untouched new supply for investor/employee/early user. Besides, investors and employees receive more than 63% tokens compared to LPs.

Why does the protocol need 2M tokens issued daily? that’s ~$700M a year at current prices, so prices will only decline unless the protocol creates a huge demand incentive.

The people who asked were the ones who bought CRV on a secondary market. Everyone else perfectly understands your point (myself included)

It’s the other way around 62% is community rewards

Good topic to address! My gut feeling is to not take more from the LPs because of the PR nightmare that would start. But before we start talking about solutions, I would like to understand the problem fully. There is more sell pressure than buy pressure. Who is selling? Is it farmers? Vested tokens? Market buyers panicking? Depending on who is doing the dumping, the solution may look different, no? If it’s vested tokens, is it a few holders? Will they stop once they’ve hit a target? If it’s farmers, then does the locking mechanism need tuning? Maybe we should order an analysis from Nansen.ai to see who is dumping?

If there are a few holders with vested tokens that keep mindlessly dumping and haven’t participated in governance maybe we can plunder and burn their tokens somehow? J/k. Haha. Unless?

As the amount of veCRV grows, so does need to lock up more for full boost, as you all know. I’m currently in a position where I have full boost, but I can’t claim, cuz I can’t afford to renew that boost. This will only continue more and more. The ecosystem profits from having a few farming whales that keeps locking up, á la yearn even if they also of course dump on the market. The winning move at the moment may be to not participate in the locking war. If so, can we increase the multiple from 2.5 to something higher to motivate locking up further? Or tune some other part of the mechanics? How many of the farm & dump actors have a boost?

I think this is an important topic to be discussed in the future maybe even near future but not right now.
Cheers go CURVE.

Wow I just woke up and actually a bit surprised to see so much support for the burn in the signal vote. I’m actually opposed to burning tokens, ironically enough. But, in principal, I do think voters should have the means to burn if that’s what they would select when given the option

What about just increasing the taper and reducing the long tail emissions a bit thereby? This would help a bit with those valuing curve “fully diluted”

I feel there is a lack of understanding in general and mostly people wanna see their tokens go up in price and that’s understandable although I feel that if we do what’s best for the protocol right now will lead to price increases in the future.
Therefore I am AGAINST.

I don’t know if I’m for or against. I feel like I don’t understand the various options and alternatives, of which I’m sure there are many. Also, since the usecrv functionality hasn’t been fully implemented and veCRV rewards can’t yet be claimed, I’m not sure how that’s going to impact things.

Clearly, though, the price of CRV has been consistently tanking since it was released to the world, and I think as a community we should think about what this means and consider the various mechanisms for imbuing value into CRV.

Against, token burns only help the price in the short term (they tend to be short lived) and it is mostly traders who benefit from this (see stellar XLM burn from a few years ago). Additionally, Bitcoin Suisse has some research on this topic to support why this is a bad idea:

“Holding all else equal, a coin burn that decreases a token’s circulating supply on the open market by 50 % should lead to a doubling or 100 % increase in that coin’s price. However, this gain may be short lived, because this can signal to investors that the company did not have a better investment opportunity available such as developing new features for the coin that can boost user adoption and organic growth.”

We should look at ways of increasing the utility of the token and expanding the eco system as opposed to these short sighted ideas.

I agree that spending energy on improving the demand side of the equation is the most important thing, despite it probably being be a longer process that isn’t immediately gratifying.

But in the case of this proposal, we wouldn’t be burning an existing supply of tokens. Rather, it would lower the rate of inflation and only affect future supply. The effect would be gradual and long term. It wouldn’t likely have an immediate effect on the market, except maybe to give investors more confidence that CRV will preserve its value.

You are right, though. This proposal isn’t meant to be a solution to CRV’s lambo problem. It is meant to give veCRV voters the option to reduce inflation if they believe that to be in their interests. I think the democratic thing to do is to lay it out there as a gauge that people can vote on. Then curve can adapt with the times. Maybe nobody votes to burn for 5 years, but then conditions change that it becomes rational to stop the inflation. The power of this proposal is that it doesnt make anything set in stone. It empowers the DAO to make the best decision at the time, and change that decision regularly without requiring changes to the protocol through formal DAO proposals (since gauge weight voting happens weekly).

voted no. would much rather see more ideas/proposals on increasing demand for the token.

also the fee loop back hasn’t even started yet so this seems too fast anyway.

What a silly proposal. This would be mainly benefiting Curve team + investors. If anything we should be increasing inflation so that the amount liquidity providers earn is significantly more than the rest. Right now 2m tokens released, of which 760k go to LPs. The rest go to the team (fair enough) and their investors (who do nothing).

I think burning is pretty deadweight loss; perhaps better to buyback and ve-lock. This would take CRV out of the market, drive up the amount of CRV needed to boost, etc.

I think burning is pretty deadweight loss; perhaps better to buyback and ve-lock. This would take CRV out of the market, drive up the amount of CRV needed to boost, etc.

Interesting idea, but with “dead” veCRV it might be impossible to reach quorum at some point…

Because to my knowledge the vested tokens for founder/employees/early LP can’t be changed by governance. Also, I would see that kind of move as a community mutiny against the team. I wouldn’t feel very optimistic about Curve’s future if that ever happened.

The new inflation is the easiest thing to target with governance, so that’s why I initially proposed this. Seems from the vote that even this Mild version of inflation control is an unpopular proposal. Looks to me that voters mostly want to keep the current inflation