sCIP#17 - Utilize CRV from the community fund to stake in Bancor v2.1

Bancor launched their liquidity mining program on 11/16 and are rewarding certain pools (8 currently) on their platform with BNT. I am proposing that we use a small amount of our community funds (quantity to be voted upon in a separate CIP) to stake in the Bancor platform to increase the liquidity of CRV in the markets and at the same time potentially have the CRV pool be incentivized by the Bancor team for BNT rewards. If we are able to get the CRV pool incentivized (should be doable with a good commitment from our side) by the Bancor team then we can potentially earn BNT in addition to fees from trading in a relatively low risk manner.

There is currently 151M CRV tokens in the community fund that is sitting unused. I am proposing that we take a small amount of CRV and allocate this to the CRV pool in Bancor. Currently, Bancor is incentivizing 8 pools:

with large-caps pools receiving 100,000–200,000 BNT per week and mid-caps pools receiving 10,000–20,000 BNT per week. The Mid-Caps pools have between ~3-6M in liquidity while the Large-Caps pools start at roughly ~7M as of this time. What this means is that at a minimum we need to allocate ~3M dollars worth of CRV (roughly 3.75M CRV at current market price of $.80) to have the Bancor community consider CRV as a serious contender for addition to their BNT liquidity mining (LM) program. Note that every two weeks new tokens can be added to the LM program and since the program launched on 11/16 then this means that on 11/30 new additions will happen.

I think that we should aim for Large-Cap consideration by making a commitment of 9M CRV. If the community is willing to approve this proposal then we can vote on the exact quantity in a separate CIP and I foresee the following three amounts (3M, 6M, 9M) as contenders.

Edit 11/25/20: Announcements on the Bancor side suggest that a pool needs to have a minimum of $400K in liquidity to be up for consideration. This is a lot less than the minimum 3M CRV estimate that was initially suggested. An exact amount can be determined in the second signal vote should this vote reach quorum.

Bancor is one of the more proven and mature projects in the AMM space that has attracted investment from respectable VC firms (ParaFi Capital most recently). They recently launch version 2.1 of the Bancor protocol that provides:

to their AMM pools. CRV has already been identified as a token that the Bancor team will whitelist for impermanent loss protection and single-sided exposure via elastic BNT supply but hasn’t been enabled for it yet due to the lack of liquidity (zero at the moment) and no activity.

By investing some of the CRV in our community fund we are putting this capital to work that would otherwise go unused. With Bancor v2.1 we can have single side exposure to the CRV/BNT pool and liquidity protection which means that there is a relatively low risk of us being affected by Impermanent loss. An example of how this works: 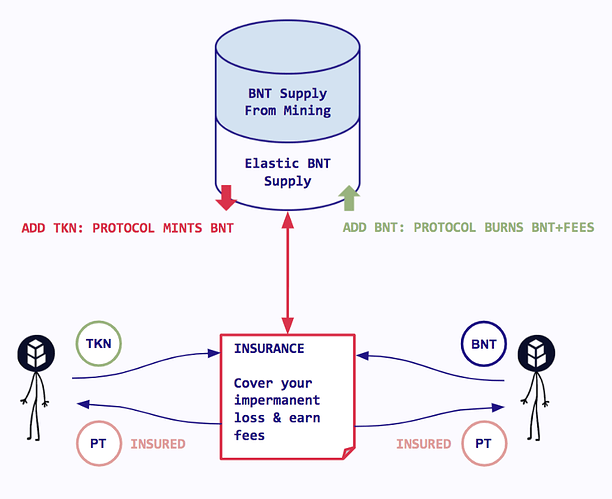 The steps will be:

I would like to hear from people voting against if they are opposed to using the community fund as an investment vehicle in general, or is this specific strategy not agreeable to you?

ya no thanks. dont think we should be using community funds like that.

community funds are for investing into the community ( grants etc )
why would you want to invest with it? what are you trying to raise capital for? what will the profit of said investing be used for? you basically use the community funds to drown out other community members who hold and LP crv themselves by diluting the crv pools with a massive amount of crv

Thanks for the feedback. I think there are three concerns from what I have gathered and which I will try to address below:

In general, I think all DeFi platforms have some inherent risks (including Curve itself) and the spectrum is relatively wide in this space. I think Bancor is on the lower risk in the spectrum if I were to rank it (similar to Curve in my opinion). They do have an active bug bounty program for their new platform and have had one dating back to at least 2018 (for their old AMM platform). If it counts for anything these days, they have also gone through the audits and verifications cycle for their new platform as well. With that said, nothing is 100% risk free in DeFi (or in the real world) and there are always risks associated with any investment vehicle. If the community does vote to move forward with this proposal then it would only be a small portion of our funds (to be decided in another sCIP) that would be use.

I 100% agree that community funds should be used for community grants but am also of the opinion that we should set aside a small amount to try grow this investment or even diversify it into other assets (could be our own 3CRV LP Tokens). All of the successful foundations that make grants available for different program areas put a portion of their endowments into investment portfolios. Their goal (like our goal) is to be able to provide grants in perpetuity and in order for that to happen you need to generate some returns in the long term. At some point in the future (5 years down the road) if Curve is still around and successful (I hope so!), we might have a foundation that is dedicated to the grantmaking activities which will have its own set of expenses that will have to be funded. I think putting a portion of the community reserves to generate some returns is a sensible thing to do.

I don’t have much to add here (will have to look at numbers on my end), but I think there is enough room for everyone. Note that If we get ‘enabled’ for the liquidity mining program then rewards would be for a maximum of 12 weeks. At the end of those 12 weeks the community can choose to reapply for LM rewards again (for another 12 weeks) or move the funds back to the community address. Note that the liquidity mining program on their end is expected to last a total of 72 weeks on their side with different pools being rotated.

I hoped that answers some of your concerns including:

why would you want to invest with it? what are you trying to raise capital for? what will the profit of said investing be used for?

as part of the second point. Thanks again.

We dont have a funding problem right now. Community fund hasn’t been touched. Community expenses have been covered thus far by Michael and the Curve team. But soon grants are going to start going out. Probably the DAO should assume responsibility of operational expenses at some point (Are we really a DAO if our founder is indefinitely footing the bill for us?) In addition to fueling growth through grants, maybe we want to make actual acquisitions and directly pay the salaries of a growing team of people meant to help us expand. Legal, security, marketing, lobbying, research etc. There’s this idea that the community fund is only meant for giving grants. I think that makes sense today, but there’s so much potential down the road for this to be the backbone that lets Curve swing some serious weight around in DeFi and the broader financial system. I don’t really know what we will one day need the money for, but it would be a shame if we miss out on growth opportunities because we let our fund dwindle.

Please note that their IL protection design isn’t tested yet in practice. And seems to rely mostly on them minting BNT tokens as much as necessary which in the context of crypto rally might not hold, especially when their token has no real utility and no buying demand.

They launch 2.1 in October and it has been live for about a month and a few weeks. I agree that it is still in the early stages and even in their Economic Analysis they allude to this:

All the above is a hypothesis yet to be validated. This is a very common situation startups launching a new product. Ultimately, once the protocol is launched there must be a careful analysis of whether the cost to the protocol of providing their services to their multiple customer groups is justified by the fee earnings potential, and/or how it should be tweaked.

I don’t think your second assertion is quite correct:

My understanding is that if there enough pool tokens that can be liquidated by the protocol to pay the LP in the token that they are providing then you will get the difference in that token (full impermanent loss protection kicks in at 100 days. It is 0% the first 30 days and 30% on day 30. It increases by 1% everyday after that up to 100% on day 100)

BNT is only issued to the LP when there aren’t enough pool tokens to cover the delta to make up for the LP loss. They do a better job at explaining this in technical explainer.

I spoke with the team, the way they explained it, the protocol will give it’s accumulated trading fees to the LP to cover for his IL if needed. If that is not enough they will mint more BNT tokens (hence elastic supply)
That means you can get up to 2x the trading fees (those from your side of the LP and those earning from the protocol) if that will be enough depends solely on the volume they push through.
With violent rally (like the one that might be happening now) the IL might be too great to be covered by 2x trading fees and minting token to infinity that has no real demand for it.
At least that is my modest take, I’m in no way expert on their protocol, but that’s what I got from a day of research on them.

Their system might work well most of the time, in calm waters, but if there is strong turbulence I’m not 100% confident it will hold.

Yes, this sounds more like what I am understanding as well. They have some controls with regards to minting BNT to cover Impermanent loss (IL) and one of those is that IL protection will only kick in at 100% at day 100 and those that remove their liquidity before will only get a fraction of coverage (or none if it is removed before day 30). In addition, they are not whitelisting every trading pair on their site and only certain pools have this protection enable (I guess to have some control as to which tokens they have an exposure to).

You are not the only one with concerns on how confident the system will function (since it is new) and the feedback has been mixed so far from what I have seen in telegram/discord groups. The program is set to run for 72 weeks so there is an opportunity in say 6 months from now to gauge community interest after it has been proven (assuming there is no quorum on the signal vote this time).

I also over estimated how much liquidity might be required to have a pool be in consideration for liquidity mining rewards on their end. Their most recent announcement suggest that it is a minimum of $400K which is a lot less than the minimum 3M CRV that I had put up in my initial proposal. If we want to be conservative (since we are testing the waters) then our commitment can be less than 1M CRV to meet the requirements.

It looks like we didn’t hit quorum for either option. Thanks to everyone who voted and provided feedback. Perhaps in a few months the community might be more receptive to the idea.