Proposal to raise A parameter on USDN pool to 500

Proposal to raise A parameter on USDN pool to 500

Raising the A factor will reduce volatility for larger trades and position the pool.

Raise the A parameter of the USDN pool to 500.

Based on simulations (see bottom of post), this is probably too high of an A value. It looks like the current A of 50 is near-optimal in terms of maximizing LP returns, although it may arguably allow for too much imbalance (approx. target is ~.8). Currently, with A=50, the balance is ~70%/30%, which is basically pushing the limit of acceptable balance.

Here is a visualization of pool balance as a function of price for different A values (assuming current pool size). With the current price of .97-.98, A=500 would result in the pool having ~90% USDN. 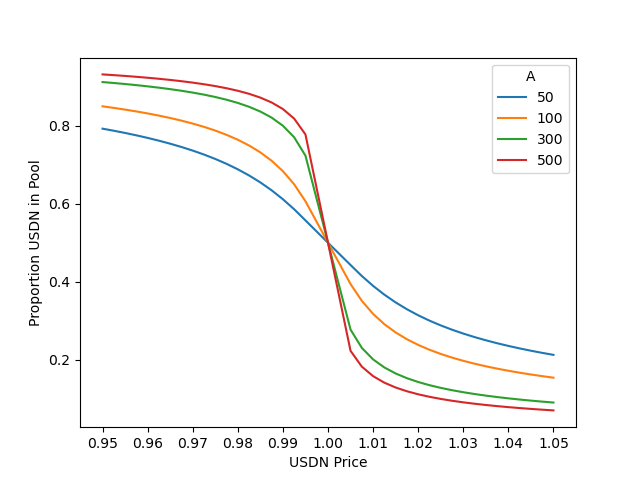 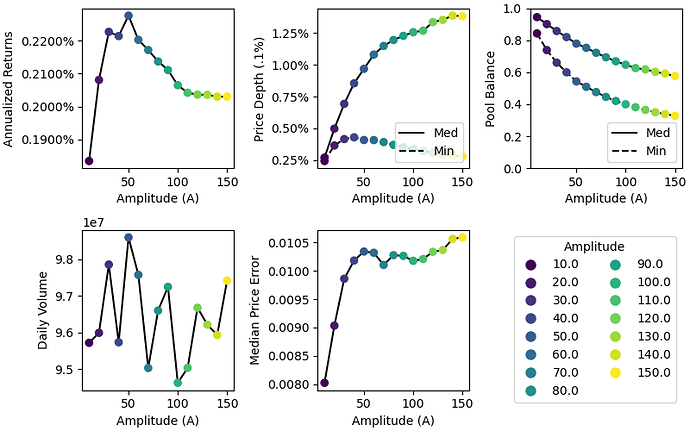 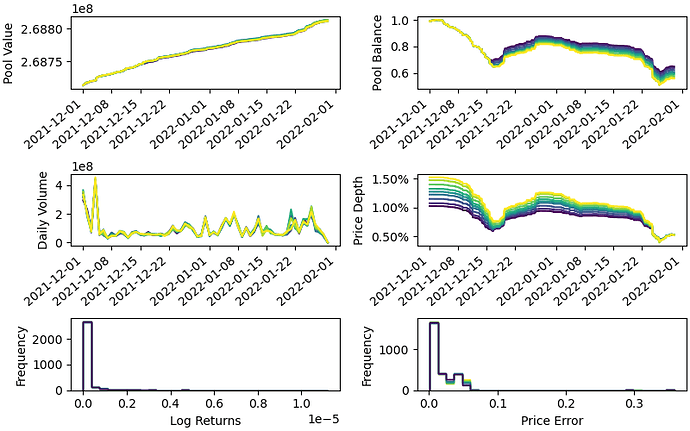 USDN is an algorithmic stable coin with a hard peg, that is the swap rate is determined through the USDN smart contract and is always 1:1. Increasing A will bring USDN curve pool in line with intrinsic smart contract architecture and will help bring more utility to USDN, thus increasing liquidity in Curve USDN pool.

@sasha USDN doesn’t have a hard peg. It’s regularly more than 1% off peg. The mechanisms to arbitrage aren’t robust enough to keep the peg tight.

Raising the A factor will reduce volatility for larger trades and position the pool.

@Many_acc There’s tradeoffs for raising A. It only lowers slippage in a certain range. Raising A isn’t a panacea if there’s underlying volatility. Raising A would actually increase volatility, because there’d be less support when it goes off peg. It leaves the pool badly positioned, selling off it’s 3crv too early.

it is off the peg effectively because of Curve pool imbalance, the exchange rate is fixed on the smart contract.

If anyone could easily redeem USDN at 1:1 for some other stablecoin, they could make a free 2-3% by balancing the pool right now. As @jiecut mentioned, this probably hasn’t happened due to an inefficient arb route.

Are these redemption mechanisms available on the ETH chain? That would make the arb much more efficient/frictionless and would likely help the peg.

There’s a misconception that raising A will improve the price stability. If you’re off peg (and USDN has been to varying degrees since september last year), and try raising A, likely what you will see is the price staying off peg as the pool compensates by becoming more imbalanced

Raising A will decrease “spurious” arbitrage in USDN pool, since USDN is always redeemable through Neutrino protocol smart contract at 1:1 ratio. Low A values lead to imbalance in the pool and increased volatility, which has no economic substance because of the specific USDN architecture. This, it turn, should lead to increased utility of USDN stable coin and increased volume in the USDN, because trading 1:1 peg is essential for USDN utility as a stable coin.

We suggest to increase A in steps, starting with A=100, and deciding on further increases based on the performance.