Badger is a DAO dedicated bringing BTC to DeFi. Our core product are Sett Vaults which enable users to optimize yield on their tokenized Bitcoin across Ethereum, BSC, Polygon and Arbitrum. Badger takes a partner first approach to how it aggregates yield across protocols like Curve, Convex, Sushi and others. It aims to maximize yield for its users while supporting the protocols providing those emissions through staking, LPing and locking their native assets vs selling rewards earned.

Badger has been a big supporter of Curve and subsequently Convex since inception in depositing our BTC CRV LP tokens on Convex (currently $425M deposited) but more importantly helping support staking of CVX and locking of CRV as cvxCRV with very little selling of rewarded assets. See below how our existing CRV LP vault strategies work.

After completing our security review both via audit and through capped deposits in a guarded launch state, we launched the first Vote Locked Convex vault (bveCVX) a few weeks ago. This vault takes deposits in CVX, locks it for the 16 week period as vlCVX and distributes a wrapper token back to users (bveCVX). Users then receive the same rewards as they would locking on Convex but with increased Badger rewards + any cvxCRV earned through our CRV BTC vaults as described above. Unlike locking on Convex directly users have partial withdraw-ability on the bveCVX vault.

Users with bveCVX can withdraw CVX from this vault to the maximum of the CVX currently idle waiting to be locked. Currently we lock every day but moving forward we intend to have a longer period in between locking intervals. There are no fees on this vault except a 0.1% withdraw fee for security measures.

Read more around how our vault works here

See diagram below for how our bveCVX vault works 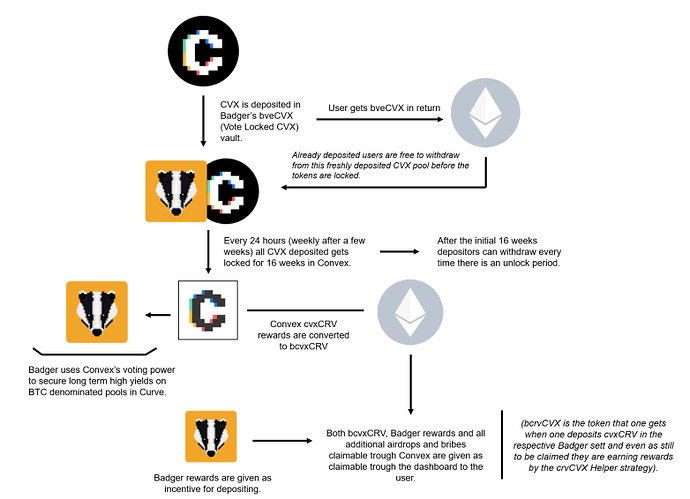 Currently less than 3% of CRV emissions go towards BTC pools although making up 20% of the TVL on Curve. Badger intends to use its Locked Convex to vote to allocate CRV emissions to BTC pools. Better underlying yield on CRV BTC LP’s = more CRV being locked as cvxCRV through our vaults. (estimated $12m/annually at current TVL levels).

Although vlCVX has proven to be an attractive locking mechanic for CVX users, there is no way for users to exit before the 16 week unlock window. Our core motivation for a bveCVX/CVX Curve pool is to give an option for lockers to immediately withdraw as needed beyond the available withdraw amount described above (which will be limited by incoming deposits). A gauge that earns CRV rewards would help increase liquidity significantly and ensure a better peg for bveCVX.

Badger has no intention to abuse CRV gauge rewards to amass an exceptional large CVX position. Instead our main goal is to increase the amount of CRV emissions to BTC pools since it directly effects our ability to offer yield to our users.

To address this Badger will be conducting a governance vote amongst its community shortly that places a limitation on the amount of CVX voting weight it puts towards the bveCVX/CVX pool during bi-weekly gauge votes. This is part of our commitment to both the Curve and Convex community to be good stewards and partners without abusing emissions.

What will be done with the CRV emissions earned for this pool if this proposal passes:

Badger will launch a new vault for CRV LP’s of bveCVX/CVX to deposit on app.badger.com that will take 100% of the CRV emissions earned and stake them for cvxCRV then distribute to LP’s. In turn locking all this CRV indefinitely and further supporting the Convex protocol’s veCRV vote weight.

bveCVX/CVX should have a gauge that can earn CRV

bveCVX/CVX should not have a gauge that can earn CRV

My understanding is that Badger has accumulated 900k CVX of vote power, enough to capture close to 10% of Convex gauge weight, equivalent to something like 12m veCRV. Votium bribes have additionally been very cost effective for boosting CRV emissions. Badger says it will devote its vote power to boosting BTC pools, and that’s a fair use of their vote power. However, they could use their vote weight to boost the bveCVX/CVX gauge, making it a honeypot (no pun intended) for vote power collection. That is the purpose of bveCVX, after all. It could become a feedback loop, powered by access to easy CRV emissions.

Convex is not a fan

Badger has managed to wield significant influence over Curve through its clever product offerings, and bveCVX plays a huge role in that. Seems to me, Badger isnt going to struggle if it doesnt get this gauge. But maybe this concern is unfounded? I’m willing to hear out a different take.

Wormhole, we spent the last few days discussing in depth with the Convex community in discord and the consensus was that Badger will limit the amount of gauge allocation via governance vote to ensure there is no manipulation of voting power to accumulate an unnecessary amount of CRV. As outlined in the proposal above.

The numbers that were discussed we up to 0.5% of total CRV emissions but this will be defined and solidified via governance in collaboration with Convex in advance of the next gauge vote.

There will also be no CVX pool for this meaning no additional CVX emissions.

There is no good reason for the Convex community to incentivize any form of vlCVX gauge because it undermines the system regardless of the % it is limited to receive.

DAOs want to get cheap CVX voting power, they want to use this gauge as a short cut and essentially exploit the system as they do not have to incentivize the gauge with their own money ones it fully kicks in.

Convex will end up “PAYING FOR BADGERS VOTES”, this is the most important part and why I think that these gauges are just leeching off the community.
CRV rewards go to the pool paying out a high APY to badger vlCVX stakers which attracts more lockers until it is saturated. This could be several millions of CVX tokens that will then get “locked” into this loop that only really benefits Badger.

What looks harmless today, can turn into a monster tomorrow…
If Badger wants skin in the game, incentivize the pool yourself, accumulate CVX tokens and play fair in a game of power.

Alright, I gave this some more thought, and think I am coming around to the idea. Badger has had a good relationship with both Curve and Convex. So long as there’s an understanding in place, this gauge should work. After all, Convex got their cvxCRV/CRV gauge, which has the same potential for abuse. That is a gauge built on trust as well.

I’m wondering why Badger couldn’t reward this pool using their own token? Or even better, buy CRV to vote for their BTC pools.

This just seems like a roundabout way for them to amass outsized voting power while using CRV’s own emissions to incentivize this recursive pool.

While the convex pool exhibits the same behavior, I should point out that Convex airdropped 2% of their protocol to veCRV when they launched, and they incentivized that pool using their own token early on.

Convex’s success in amassing veCRV votes shows how powerful and valuable these recursive mechanisms really are. I’m not so sure that if the same vote for whitelisting and gauges were proposed today, if veCRV owners would let it pass for such an insignificant price again.