We propose to add the ARTH.usd+3CRV pool to the Gauge controller to enable users to assign gauge weight and mint CRV.

MahaDAO Abstract:
MahaDAO is a DAO focused on creating the world’s first valuecoin, ARTH. A valuecoin is a coin that maintains its value (or purchasing power) over time.

ARTH.usd is a positive rebase token backed by ARTH that maintains it’s price at 1$. This makes it flexible to be used in stablecoin pools like Curve.

We propose to add pool ARTH.usd-3pool and include it in the Gauge.

The current curve pool is the home for the most of the stablecoin’s liquidity and this is where most users are buying/selling to use the protocol for leverage.

Governance: The protocol currently uses a governance mechanism very similar to Curve’s veCRV model. Users come in with their MAHA tokens and lock them up to get MAHAX. MAHAX holders then vote on various proposals with the protocol.

Oracles: The protocol uses a mix of Chainlink and Umbrella finance feeds to get the prices of the collaterals.

Audits: ARTH is audited and its technical implementation is largely based on Liquity’s. Reports of the audits on Liquity can be found here. Furthermore we have conducted additional audits from Certik, Hacken and continue to conduct regular audits of the code. We also have a bug bounty program set up.

Centralization vectors: Most of the ownership of the protocol has been revoked, except for the ability to add new collateral types and update the peg which is kept behind a 3/5 Gnosis Multisig but that will soon get migrated to a vote proxy as part of our decentralization roadmap.

Market History: The ARTH.usd token has not experienced significant volatility or de-pegging due to its redeemability with the underlying collateral. 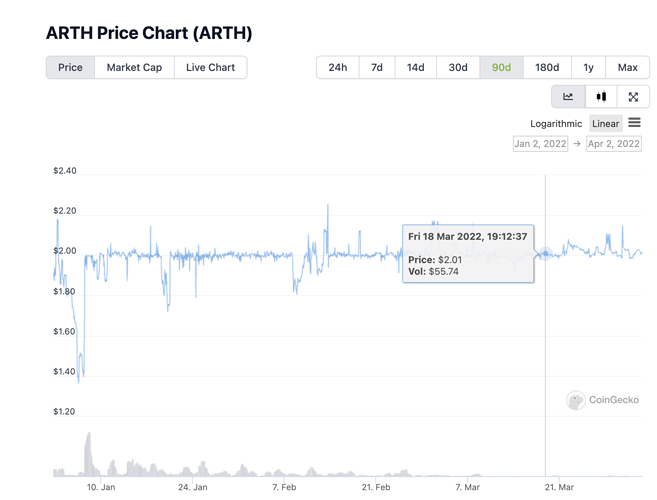 For:
ARTH.usd should have a gauge that can earn CRV

ARTH performs well and maintain its peg within the affordable range of volatility. This was accomplished even due to the trading on Uniswap-forks. ARTH.usd-3Pool LP in Curve will make the ARTH peg even more stable.

ARTH/MahaDAO has a deeply engaged community in the protocol who have been with us throughout the inception. Majority of MAHA community members have staked their tokens for more than 4 years.

ARTH will start to play a even more important role in Defi allowing users from various other protocol to leverage the stablecoin to get exposure to more staking pools and yield farms.

ARTH is a fully decentralized stablecoin. The team keeps transparency and decentralization as one of the top most priorities.

Against:
ARTH.usd should not have a gauge that can earn CRV

An innovative idea with a very good team. A dynamically developing project;) Stable anti-inflationary stablecoin, what more could you want?

I’d love to see that pool, it’d create a smooth process for easy exchange of ARTH so it will be more stable throughout the time AND it could be used for leverage as ARTH.usd!

MahaDAO has created a revolutionary stablecoin called ARTH that appreciates against inflation. Having an additional fully decentralized stablecoin available to a greater audience can help protect liquidity providers in the event of unexpected events (i.e. legislation being passed in the US, EU, etc.) that could negatively impact centralized stablecoins.

I think that the theory raised by the Mahadao team of developing and implementing a globally objective standard by which to measure value and then adding it to a cryptocurrency is groundbreaking and if implemented properly can change the way finance is viewed around the world. If the arth stable coin is able to tackle inflation and other money remittance issues such as transfer of funds for the unbanked while also staving off inflation, then it will be truly grounbreaking
This seems to be a very good opportunity to put it to the test!

Achieving great compatibility is key and setting up a curve ARTH pool would be crucial for that. Would love seeing this implemented.

Would love to see Maha added to Curve. Both amasing projects. Maha doesnt only have a great idea launching the first stablecoin that defeats inflation, but the execution and the ecosystem they build is impressive. Maha is here for the long haul and will be one of the rare projects that will make a difference in the ‘real’ world.

Hoping to see this happen. Love what I am seeing from Maha and Arth.

This proposal makes a lot of sense, there is a clear mutual benefit to the MahaDAO and Curve communities. Looking forward to seeing this move ahead.

The first value coin which has proven to be anti-inflationary in recent times. What a good time to have Arthcoin and MahaDao here

Looking forward to seeing the protocol to be added to Curve. This will benefit both protocols. Maha has a lot of potential and strong fundamentals providing inflation proof stable coin, that appreciate during bull market and being stable during bear, this will be huge narrative and use case during these times of huge inflation all over the world. Moreover, the project is DAO, which is great in terms of governance.

Wow , a token ecosystem addressing the prevailing inflation issue faced by many countries. With the use case around maha and arth coin , its valuecoin. This will be of mutual benefit of Arth.usd is added to curve guage. Because i feel Arth will be HUGE!

ARTH has a great future and will play an important role in blockchain. First valuecoin that will allow us to preserve our wealth.

Arth is an incredibly innovative product with a clear use case. The team is very dedicated and professional. Would love to see arth added to the curve pool in order to bring this innovative product to more users and protocols throughout many crypto ecosystems

Cannot wait to see ARTH on Curve! I believe ARTH is future of the payment, we would like to see innovative techs on Curve!!

Arth with its unique vlue proposition has a lot to offer the communities of MahaDAO and curve.fi. This integration gauge controller will solidify and mutually benefit both protocols.

We are dealing with a revolutionary, anti-inflationary solution that will soon gain widespread recognition - especially looking at current geopolitical situation. The team’s professionalism and dedication to the cause provide a good basis for the new economy. It seems, ARTH will play huge role in the cryptocurrency world. I cross my fingers for a fruitful cooperation with CURVE ecosystem!