Summary:
Curve was recently deployed on Celo. Following this deployment, the Celo community is proposing to add the agEUR / cEUR pool on Celo to the gauge controller so users can assign gauge weights and receive CRV incentives.

Mento protocol is a platform for using on-chain governance mechanisms to propose and launch governance approved stable assets. Today the family of Mento assets consists of cUSD, cEUR and cREAL on the Celo blockchain.

cEUR (bridged via Portal) is already listed on Curve on Ethereum. It is part of the Euro Pool together with agEUR and EUROC. As of this writing, the TVL of the pool is $2.7m.

cUSD (bridged via Portal) is already part of cUSD/FRAXBP pool on the Ethereum mainnet.

Angle is a decentralized stablecoin protocol issuing agEUR. agEUR has recently been made available on Celo through the Angle Bridge system that relies on LayerZero message passing solution and Angle security framework.

Issuance & Redemption Mechanism: The Celo Reserve FAQs. What it is & how it works | by Markus Franke | The Celo Blog

cEUR is one of Mento Protocol’s on-chain collateralized stable assets on the Celo blockchain. The token address on Celo is: 0xD8763CBa276a3738E6DE85b4b3bF5FDed6D6cA73.

Mento stable assets are backed by an on-chain Reserve. As mentioned in the summary, outstanding supply of Mento assets is fully backed by USDC and DAI. As of this writing, The Reserve is overcollateralized by 218% and consists of over $149M in holdings made up by 36M DAI, 31M USDC, 283 BTC, 4K ETH, 130M CELO, and 83K cMCO2, against an outstanding supply of $66M in stable assets.

As part of their research, the Mento team has simulated various market conditions (summary article), including bear market conditions. And while simulations can never capture all the complexities of the real world, analyses showed stability through a wide range of adversarial conditions and informed crucial design choices, such as diversifying the reserve by including low-volatility assets.

CELO is held in the Reserve smart contract. The Reserve ensures that non-CELO reserve assets are held safely through the use of approved, qualified and licensed custodians, currently Anchorage (https://web.anchorage.com/anchorage-celo/) and Hex Trust (https://hextrust.com/), which do not operate in countries that are blacklisted by the Financial Action Task Force (FATF) or subject to any sanctions prohibitions. Custodians are required to make publicly available the assets they hold on behalf of the Reserve to ensure that Celo stakeholders and the broader Celo community have full transparency with respect to reserve assets.

Angle is a decentralized stablecoin protocol designed to be both over-collateralized and capital-efficient. The protocol has launched agEUR, a Euro stablecoin, which has become the biggest decentralized Euro stablecoin. The TVL in the Angle Protocol is $46m with $31m agEUR in circulation, as of this writing.

There are different mechanisms (also called modules) by which agEUR can be issued all having in common that agEUR must be released on the market in an over-collateralized way.

agEUR has kept a super tight peg since its launch. It is involved in several other gauges on Curve as well (agEUR-EURs-EURt, agEUR-ibEUR, agEUR-EUROC-cEUR, agEUR-EUROC) which have historically yielded a pretty important volume. In the past, it has also helped other Euro stablecoins (like EURs) maintain peg when the redemption mechanism failed to work well.

The different versions and modules of the protocol have been audited multiple times, and the protocol has received one of the highest grades from DeFi Safety in terms of transparency.

Protocol is available on different chains beyond Ethereum, but not on Celo yet. The agEUR version available on Celo is a bridged version (with LayerZero). Angle has built a security framework that makes sure that its exposure to a bridge hack is pretty limited. It includes global and hourly limits.

As agEUR does not exist natively on Celo, a gauge will also help facilitate the stabilization efforts of agEUR on Celo using cEUR which can be arb-ed directly on the chain.

Mento uses a formal on-chain governance mechanism to manage and upgrade the protocol such as for upgrading smart contracts, adding new stable assets, or modifying the Reserve’s target asset allocation. All changes must be voted on by CELO holders. A quorum threshold model is used to determine the number of votes needed for a proposal to pass.

More details can be found here: 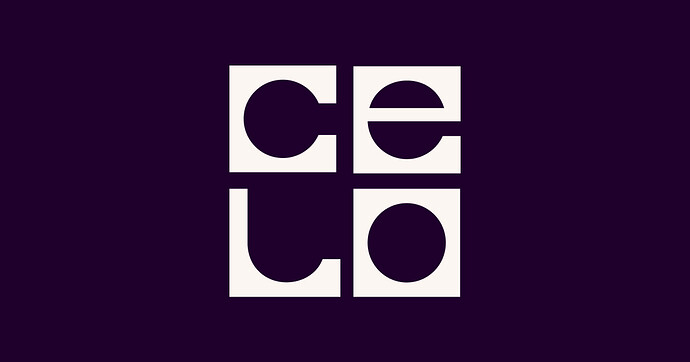 Overview of Celo governance and how the network is managed using the stakeholder proposal process.

Angle: Angle governance is explained in details in this page of our docs. The Angle protocol is controlled by veANGLE holders which have the power to vote on Angle Improvement proposals. Votes are implemented on-chain by a 4/6 multisig composed of the following signers: Pablo Veyrat, Guillaume Nervo, Picodes (all 3 from Angle Core Team) @SebVentures (from Maker), Julien Bouteloup and 0xMaki.

The Mento Protocol relies on oracles that report CELO/EUR rates on the following exchanges:

More details regarding the oracles and issuance & redemption mechanism can be found here:

How the SortedOracles smart contract uses governance to collect reports and maintain the oraclized rate or the Celo dollar. 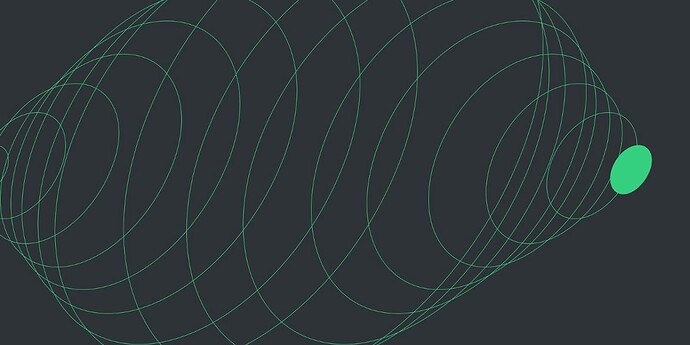 Zooming in on the Celo Expansion & Contraction Mechanism

In theory, a stablecoin will keep its peg as long as demand and supply meet at the target price. A stablecoin with an excess of supply will

Angle: The protocol uses Chainlink oracles (and in some cases Uniswap TWAPs in parallel to these feeds to make sure oracles are non manipulable)

The process of reserve trading has been internally and externally (NCC group) audited.

A stability analysis was performed by Gauntlet and Economic Analysis by Prysm Group. 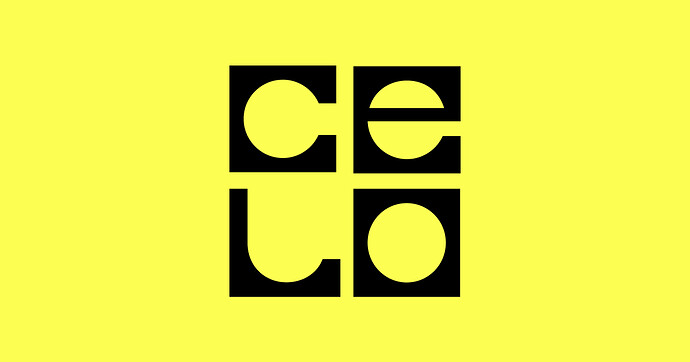 As a threshold matter, the Mento Protocol is a stable asset platform that runs on the Celo Layer-1 decentralized, permissionless blockchain.

As part of Oracles decentralization effort, one Oracle is run by Celo community members (link to the proposal). The plan is to have at least half of the Oracles to be run by the community members by end of the year. In the nearest future Mento will have an automated on-chain circuit breaker to limit trading via mento when prices shift more than a calculated threshold (link to the proposal). The Mento issuance & redemption mechanism has safeguards in place to ensure that the reserve is protected in the case of oracle failure. (Celo Stability Algorithm (Mento) | Celo Documentation)

Angle: The protocol runs on decentralized systems, it relies on competitive liquidations, and vote-based governance. There’s no single person or dev with admin controls over the protocol. And as disclosed in question 1., the treasury and some part of the protocol are secured by a multisig of doxxed team members.

According to CoinMarketCap, since 29 June 2021 and until 20, January 2023, on a closing basis, cEUR was within +/-1.50% of the peg, 95% of the time and within +/-2.50% 99.6% of the time. cEUR withstood the market pressure caused by the collapse of UST; the on-chain stability mechanism Mento protocol immediately responded to excess supply around May 11, and remains within the peg as of the date of this proposal. Deviations from the peg are observed in relatively illiquid venues where small transaction sizes have a disproportionate impact on the price. 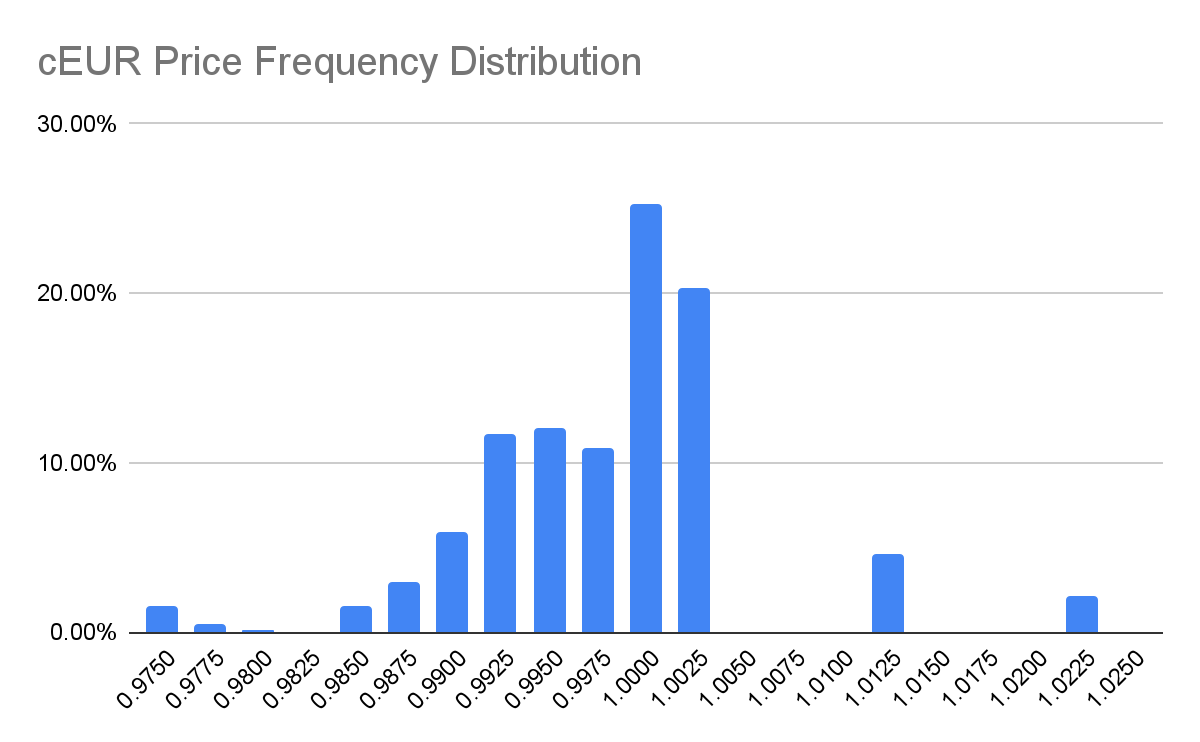 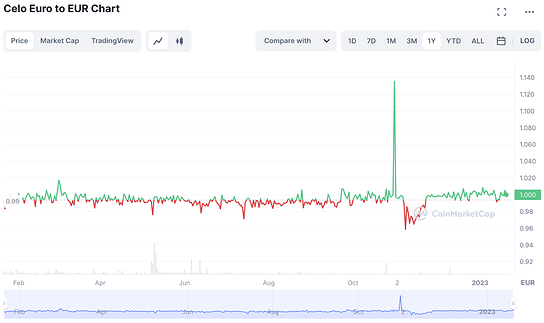 Angle: agEUR has remained stable since its launch, despite adverse market conditions. agEUR has held Curve pools for several months, for most of which it has provided a considerable share of volume on Ethereum and Polygon. During the week of the UST crash, it even helped EURs keep its peg while there was some lag in the redemption process. Same happened with ibEUR. It kept its stability as well during the market turmoil of the last months.

The agEUR/cEUR pool on the Celo blockchain is expected to bring substantial liquidity and swap fees to the Curve DAO. Limited options currently exist for converting cEUR to non-Celo assets - and vice versa - often requiring a mainnet bridge. Angle’s integration with 6 chains through LayerZero simplifies access to cEUR via agEUR, boosting liquidity on the Celo blockchain for swapping with non-Celo assets. Adding the gauge to this pool likely brings a positive impact.