Convex currently controls close to 52% of the voting power of Curve. This proposal (discussion) is to take a position to acquire CVX and allow veCRV control of Convex’s treasury.

Currently 18 DAO have a position on CVX. source 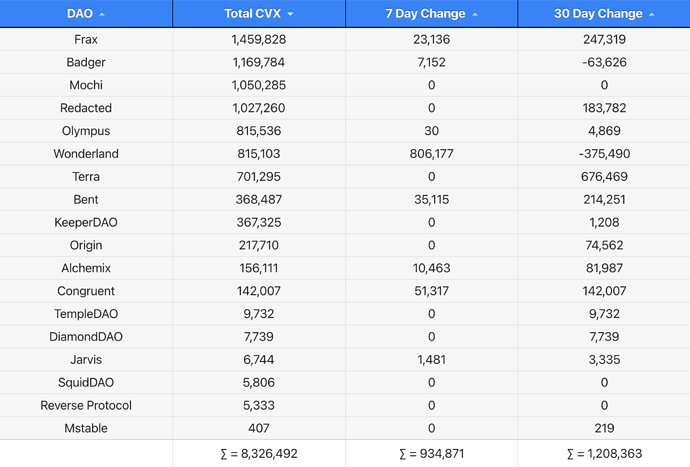 With the competition heating up, the synergies between Curve and Convex are accelerating. Curve emissions are nearly all getting vacuumed into Convex nowadays.

We can read on llama.airforce “Convex […] controls close to 52% of the voting power of Curve.”

Curve could increase the “Flywheel” effect by acquiring a CVX position.

“CRV initial distribution allowed for a community fund of around $151M to be used in cases of emergencies or awarded to community-lead initiatives.” Source

Use part of the community fund to buy CVX. How many ? I don’t know. But I would like to discuss the proposal.

Hi @hamzzz, I think that makes a lot of sense, it would allow us to retain a say in the governance of our own land and also provide a new stream of income for the DAO (bribes, share of upcoming FRAX protocol fees and likely more to come).
In term of how many, I think it would make sense to see Curve on the top of this list eventually, but at current CVX price of ~$27, that would be a substantial ~$40m investment. I wanted to check the current size of the community reserve but could not find the wallet address in the docs, anyone able to share a link?

Interesting concept; though I wonder how this plays out with voting since it would be somewhat recursive in nature. Today Curve votes are mostly on-chain where Convex votes via snapshot. If Curve were to hold a large amount of CVX, how would it vote through its CVX position without also weakening its voting mechanism (eg. no 7 day vote period for CVX based votes) or it would have to be granted to a set of trustees to vote through CVX on behalf of the veCRV holders.

As far as I know, the Curve DAO treasury/community fund does not have any veCRV and therefore has not had its own vote on any DAO proposals or gauge votes. I don’t think the treasury needs to start acquiring voting power in the DAO now (ignoring follow-on questions of who would decide how to vote the veCRV or CVX, etc.).

Without any special reason for the treasury/community fund to acquire Curve DAO voting power, then the question is distilled generally to what is a good use of the community fund and I don’t think investing it in CVX specifically has any merit. The community fund has found some recent good uses, such as the security research on gauge proposals that have been funded with grants.