Frax finance is a fractional-algorithmic stablecoin protocol. FRAX price performance from the inception has proved its stability to stick to the peg in comparison to other stablecoins. Frax has already gone through the expansion and contraction period with the respective swings in the ROI of the incentivized distribution programs (“yield farming”). However, it successfully resisted to the exiting supply pressure even having the Uniswap as the main trading venue. It was due to the sufficient share of users having locked their LP tokens for long-term period and contribute to the protocol on the daily basis.

Developer team and the community work collaboratively on the organic growth of the protocol. There are several upcoming positive triggers including technical improvements of PID controller and vAMM as well as listing on Sushiswap with general trading routing for FRAX-FXS amd FRAX-WETH pairs. FRAX-USDC will be listed on CRV finance module.

We propose to add pool FRAX-3pool and include it in the Gauge.

Frax is the first fractional-algorithmic stablecoin protocol implemented on Ethereum which aims to provide a highly scalable, decentralized, algorithmic currency. Frax protocol is based on 2 tokens: FRAX as a currency and FXS as a seigniorage token. FRAX is backed by USDC in collateral in proportion to Collateral Ratio (CR). When the price of FRAX is above $1 the CR decreases and when FRAX is below $1 vice versa which lead to agnostic nature of collaterization. The main principle is that FRAX is always mintable or redeemable for $1 equivalent. Thus, in the fractional phase the difference between 100% and CR is provided in seigniorage token FXS.

From the inception FRAX has been stick to the peg of $1 trading within the normal range. Figure 1 illustrates the USD price for the last 30 days for stablecoins from different groups: fiat-backed like BUSD, GUSD etc.; algorithmic with overcollaterization like sUSD, DAI; elastic like AMPL and algoseignorage like BAC, ESD and FRAX. The noticeable divergence is present for BAC and ESD – fully algoseignorage without any collateral. Also, elastic AMPL converges to the peg with the high volatility.

Figure 2 illustrates the performance without 3 aforementioned unstable ones. As we see FRAX goes in line with other stablecoins demonstrating alike volatility.

If we exclude sUSD which has the big spike at the beginning of 2021, we will get the performance illustrated on Figure 3. Figure 3 shows the dynamics of the remaining stablecoins and as we see FRAX does not stand out from others.

For this period FRAX has already gone through the expansion phase while the CR was steadily decreasing and reached 82% as well as reverted back to 88% during the high pressure on the peg. For the clear view we can also look at the isolated performance of FRAX:

The mechanics of FRAX stability through algorithmic fractional collaterization proves its efficiency while staying more capital efficient rather than its overcollaterized peers.
It is worth to note that while FRAX in line with the industry practices introduced seigniorage token distribution (“yield farming”), after the crucial drop in the APY from 100%+ to 20% the liquidity in the incentivized LP decreased without the same amplitude.
The largest FRAX-USDC Uniswap LP suffered only 28% outflow from the ATH (Figure 5).

The structure of the staked period also makes us sure that the project is on the solid ground: 25% of the FRAX-USDC LP are under the locked and 7% under the long-term lock for 2+ years as shown on Figure 6 and Figure 7.

This LP is the most risk-averse option to enter the protocol, so when we look on the protocol native LP of FRAX-FXS we see the increase in engagement of the liquidity providers on Figure 8 and 9: 66% of UNI LP are staked and 46% under the long-term staking. These metrics allow to conclude that ahead of the speculative capital injected in the protocol pursuing the APY there is significant share of users investing in the protocol on the long-term basis.

Community resistance to the contraction phase also can be seen on the spectrum of inflow-outflow dynamics on staking contract for FRAX-USDC Uniswap LP: as illustrated on Figure 10 after the significant outflow on Jan, 23rd, 26th and 27th the pace slowed down and converged to net zero.

In the light of the aforementioned we suppose that FRAX has acquired long-term supporters, has correctly incentivized arbitrageurs to maintain the peg and has got the social consensus multiplying the USD denominated collateral with the ratio above 1 (1/CR).

The protocol is led by the seasoned team with the experience in the space. The key leaders have public profiles, actively manage the community and transparently respond to the inquiries as well as disclose the roadmap.
After the upcoming improvements the protocol is to complete the decentralization procedure. Thus, it is not another degen protocol. From the Curve benefits perspective, figure 11 and 12 shows the daily trading volume and respective LP fees on Uniswap for FRAX-USDC pair. Although the trading APY is not outstanding the fee revenue does not fade and can add value to the Curve and CRV. 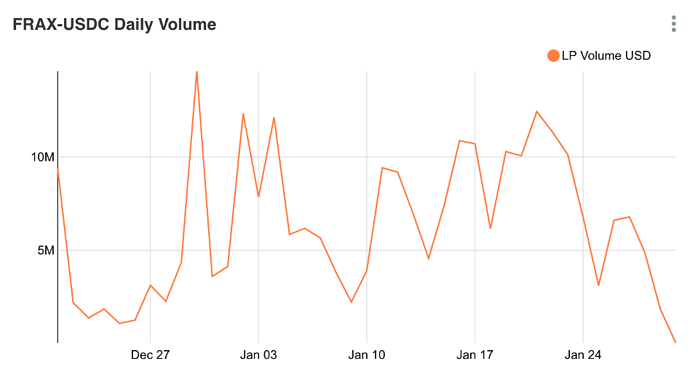 Shown fees were calculated for the Uniswap fee schedule, so the Figure 13 shows the would-be fees if they went though Curve. Total estimated fees for LPs and veCRV holders would have been 104k USD from the Dec, 21st to date. 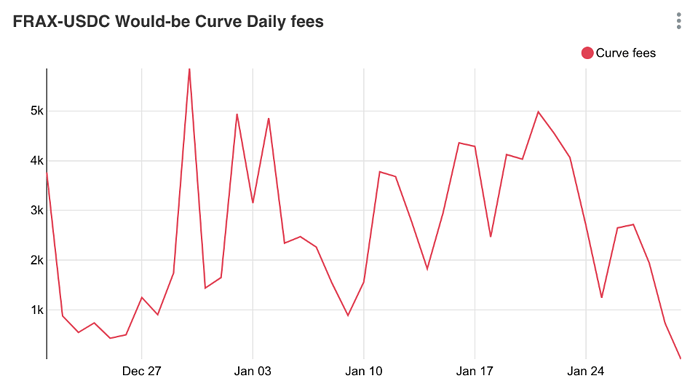 In the light of 2.7m total fees generated on Curve for the same period these fees would have increased that figure by 3.7% as per the cumulative fees on the Figure 14.

There are several upcoming events and improvements that would make another boost to the organic growth of the protocol and acquire new supporters. One of them is lising on Sushiswap and making these pairs eligible for Sushi distribution and setting it as a routing currency. Also, the technical improvements of PID controller and introduction of vAMM will advance the peg stabilization mechanics to create more dynamic so more efficient incentive structure. Among these advancements the Curve listing will fit and narrow peg dynamics, streamlining the positive feedback cycle of higher stability – higher fees – higher inflows – higher stability. We consider FRAX as the best next-to-be listed asset on Curve protocol and Gauge.

What FRAX community would contribute to Curve from their side

In light of the absence of IL risk the anticipated synergy of the FRAX-3Pool may increase the total liquidity and trading volume manyfold.

To be confirmed by the Founder of the project Sam Kazemian.

According to the aforementioned statements regarding stability and organic volume that can securely contribute to the revenue of the Curve LPs and veCRV holders.

To be added after the Curve team review.

1.FRAX performs well and maintain the peg to $1 within the affordable range of volatility. This was accomplished even due to the trading on Uniswap which is not the right place for stablecoins trading according to
https://sabretoothsg.medium.com/uniswap-is-the-reason-why-algo-stablecoins-cant-maintain-the-peg-and-how-to-fix-it-91e9f7f93d4f . FRAX-3Pool LP in Curve will make the FRAX peg even more stable.
2.FRAX has active community deeply engaged in the protocol which has been staying either through the expansion period and high YF APYs or the contraction period. The attitude and user behaviour is illustrated by lock-ups and liquidity dynamics.
3.FRAX is evolving and the developing team is working on business development as well as technical development. The team has public profiles. The upcoming integrations would bring more value to the system and generate more interest and volume in FRAX conversion transactions.
4.FRAX is more transparent and secure than some of the already listed stablecoins on Curve. FRAX has the verifiable collateral and transparent fundaments which make it differ from, for instance, UST. UST is backed by the Terra blockchain consensus and is issued by burning LUNA native token, which is subject to vulnerabilities and volatility.

Being risk-aversed in the stablecoins trading business is beneficial, so the algorithmic stablecoins impose market risks on the LPs and reputational risks on the protocol itself. However, it is applicable to AMPL, BAC and ESD which has no backing and collateral while FRAX is fractionally algorithmic and at the moment 86.25% collaterized by USDC so the money multiple is quiet low.

Evolution of macroeconomic thought has ended up with the view that social consensus of currency is worth more than the collateral it is backed by and overcollaterization/full-collaterization is excessive and hinders the development of the system. This resulted in the flexibility of macroeconomic policy with reserve funds to stabilize during the turbulence and inject enough supply for the growth during the expansion. We see that crypto native currencies can adopt the best approaches from the tradFi and combine it with the possibility to be the beneficiaries of the currency adoption through the seignorage tokens. FRAX may be on the front lines of this innovation. 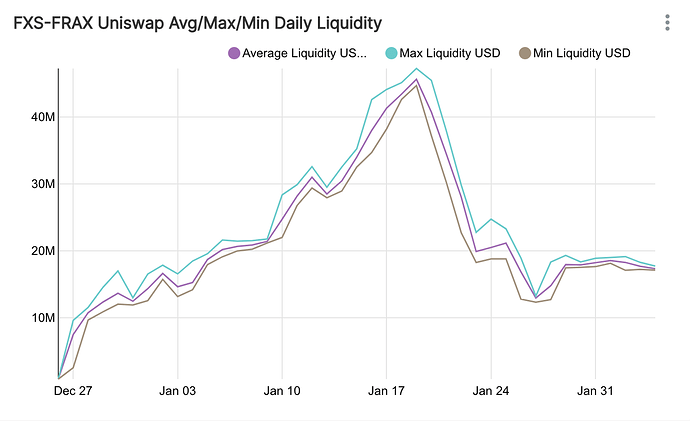 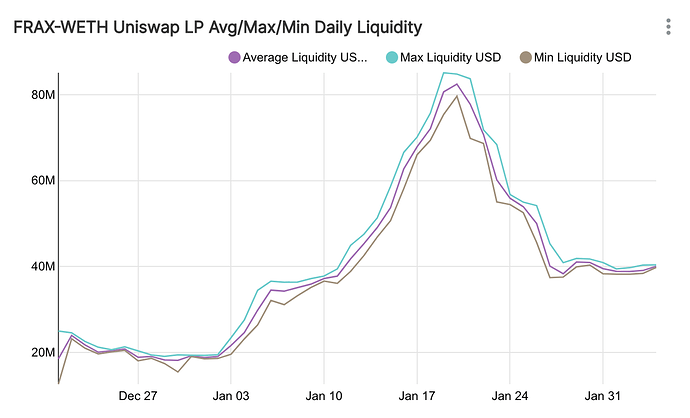 Definitely the right step, it is truly an amazing project

I fully support this proposal.

Frax is an (partial) algo stablecoin that actually works and as the protocol evolves i think will hv a good chance to become detached from centralized stablecoins for its collateral while being more capital efficient than DAI, i fully support the current proposal.

Thanks for adding this proposal iswarp! As the Founder of Frax and a big fan of Curve, I would be very excited to support a FRAX-3Pool.

We’d like to show how we’d support FRAX’s 3Pool should the Curve community vote yes on this proposal. Here is what we will immediately get to work to do after Frax is added:

Thank you for your consideration Curve community. I am a big fan of you all.

This is probably one of, if not the best proposal that i’ve ever read for adding a pool. Totally fundamented, well explained. When the sinal post gets published I will no doubt vote Yes.

I alreadyy support frax from begining!I believe that frax is best proposal at this stage of crypto industry and i hope it will be partnered with Curve.I also suport Curve from June.2020, great job team!

You have sone a great job,I’m right behind you.Partnership with Curve will be a level up for us all,keep working

Awesome, Frax has held its peg since inception and deserves to be part of curve

Expect great things from this project, already nice partnerships announced! Partneship with Curve will send Frax to the moon,is going to be one of the greatest projects of 2021!I am sure it will be the one that is stand out of the crowd.

I fully support this proposal.Definitely the right step, it is truly an amazing project.Solid fundamentally strong project. Approve ! Cannot wait Frax join at curve! And we all go to the moon.

I am a long term curve LP and staker and fully support this FRAX pool. FRAX brings a lot to the community and I can’t wait to join this pool!

It might be worth making a signal poll so you can see if people with voting power back this? Has anyone made use of the crv.finance FRAX metapool?

This is probably one of, if not the best proposal that i’ve ever read for adding a pool.Totally fundamented, well explained.You have done a great job,I’m right behind you.

I have got the feedback on the format of Figures 1-3 with regard to the lines so FRAX is hardly to identify so made the updated version with distinguishable formatting.