Like they have to do to farm the alUSD pool currently, but just different, because alusd is a token which must not be listed?

Get veCRV to vote for returns and lock up some portion to vote for boost like yearn is currently doing with alUSD?

But not alusd, because reasons.

The reason stated is stopping double dipping, we have proven that’s not prevented, so other unstated reasons. Perhaps reasons without good justification.

(I cannot stress enough but by design alUSD is not a double dipping token. Its the vault that earns not the debt token. So there is likely many alUSD liquidity providers not double dipping at all. Only alUSD LPs with a corresponding vault are double dipping, and can do so in any pool, not just alUSD)

I basically think that things like that has to be fixed by weight voting not by gauge surgery.

For some reason how voting works now is funny for me.

Correct, then let them dump ALCX, not CRV, first will not take long time lol

That’s besides the point. The point being that alUSD can be used to leverage farm CRV even if alUSD/3pool is not incentivized. In fact, alUSD holders are free to use yearn to farm pools with a Volume/CRV-rewards ratio worse than that of alUSD/3pool. Banning CRV rewards to alUSD/3pool fixes nothing.

It seems you have a fundamental problem in the token/reward/incentive design and you’re trying to patch it over with this vote.

No such thing as double-dipping. Curve incentivises liqudity by paying CRV per amount of liqudity provided.

There is no such thing as double dipping

Every $ in Curve earns its fair share of CRV, as determined by the gauge weighting for the week. Leveraging is fair game. I’d only support limiting leveraged farming if it presented some systemic risk. CRV number maybe go down doesn’t constitute a systemic risk to me.

We know leveraged farming is a thing, it’s been discussed in other contexts (ie. 3CRV gauge token collateral on Unit) as a positive feature. The decision to punish specific leveraged farming strategies seems misguided to me. The longevity of the Yearn-style CRV harvesting depends on the asset continuing to have a healthy trajectory. CRV dumping at the protocol level isn’t new, and it isn’t necessarily the bogeyman some people make it out to be. Obviously Yearn has a long term stake in Curve, and they support us with CRV locking and ecosystem development. IOW, generous CRV distribution, even when it is used for dumping, has a way of further cementing Curve as the dominant AMM. We are getting the world addicted to our yield, and we should continue aggressively.

I believe alUSD should keep its gauge. I also believe we must put an alETH gauge to a vote.

CRV distribution, even when it is used for dumping, has a way of further cementing Curve as the dominant AMM.

What is really cementing Curve is when liquidity provider become veCRV locker. There are plenty of stable pools here who’s LPs veCRV power is very high.

We are getting the world addicted to our yield, and we should continue aggressively.

CRV rewards are not forever I mean inflation will drop hard next years. So why do you think your yield addicted coins will keep perform on Curve?

Truth is that all these alUSD and MIM, etc. are about zero add-value Defi projects and long run they offer nothing real on top of Yearn, Convex and Curve.

Projects like Alchemix or abracadabra essentially are leverage LPing Curve. They provide more liquidity, so they get more rewards.

I’d only support limiting leveraged farming if it presented some systemic risk. CRV number maybe go down doesn’t constitute a systemic risk to me.

Exactly. To serve a level playing field as an infrastructural AMM protocol, we should be governing based on principles, not on a specific project / team.

I personally don’t think we would like to go down that road.

Lots of good discussion here, I’m generally in agreement that this “double-dipping” concept isn’t the correct way to look at it - CRV gauge rewards are distributed according to amount of liquidity provided. As many others have mentioned, ALCX isn’t the only protocol performing leveraged CRV farming. Others have also brought up the point that the gauge pays out more in CRV rewards than we are receiving in trading fees (However this is true for the majority of pools across the board) This is a broader tokenomics issue that warrants its own discussion

Every $ in Curve earns its fair share of CRV, as determined by the gauge weighting for the week. Leveraging is fair game. I’d only support limiting leveraged farming if it presented some systemic risk. CRV number maybe go down doesn’t constitute a systemic risk to me.

@charlie_eth does the team believe this constitutes a systemic risk?

We don’t currently, no.

@charlie_eth Any thoughts as to when this is going to go up on snapshot to measure sentiment from veCRV holders?

At present the Motivation and Summary are out of line with the Specification and that should either be noted in the original post or corrected before a vote.

Wouldn’t want voters making decisions under false pretenses that this Specification prevents double dipping, as implied by those sections.

Very healthy discussion (except for the unconstructive “dumb idea” type of comments), it’s nice to see.

I am very much in the camp that double-dipping is not really a thing as CRV rewards are a function of liquidity provided, as pointed out by @statelayer.
I also support the idea that we should let market forces decide on CRV reward allocation via gauge weight voting rather than trying to make governance favour/discriminate certain projects over others, like pointed out by @Globallager and several others.
I believe keeping a level playing field across participants should be an uttermost priority for building a successful, inclusive and sustainable DeFi ecosystem.
For that same reason, I also support @WormholeOracle proposal to put an alETH gauge to a vote.

CRV is a temporary incentive for the first 6 years of the protocol that gives the opportunity to LPs to participate in the governance (including voting on gauges) and retain a share of the trading fees generated by the protocol at perpetuity.

Then, it is a personal choice whether you believe keeping and locking those CRV to get involved in the governance and collect your share of $3CRV fees has value, or if you prefer to sell the CRV today for an immediate higher reward.

Having the $3CRV rewards proportionate to liquidity provided in a direct way would effectively mean removing the admin fee which act as an economic incentive for CRV holders to get more actively involved into the governance and also provide a stream of income for the long term sustainability of the protocol. In my view, our token/reward/incentive design works actually quite well.

There is a lot of lively discussion here which is nice to see.

The only thing I can add is that a primary driver for CRV token is to get widely distributed. Some will sell, some will HODL, some will stake. Curve has a big emissions rate but in the end if it distributes the token widely then Curve project will remain powerful and robust.

With veCRV $3CRV rewards being indirectly proportional to liquidity provided, but $3CRV fee-rewards coming in through trading volume, does that create the possibility of under-utilized (useless) liquidity? That is, one can suck down those sweet rewards by gaming the liquidity pools with liquidity that nobody uses (probably by using leverage).

I dont believe that this idea can be realized. Remember reasons for the failure of TradFI

Gaming the system by providing liquidity to a pool that nobody uses with the sole intend to suck down CRV rewards would require a significant amount of voting power to allocate gauge weight to that pool + capital to commit to that pool. Everything else being equal, you are better off allocating your capital and vote to a pool that generate fees. See illustration below, assuming voting power (and share of admin fee) is proportional to liquidity provided. To keep thing simple, I assumed there were only two pools: pool A which generates $5m of annual trading fees and pool B which generate 0. 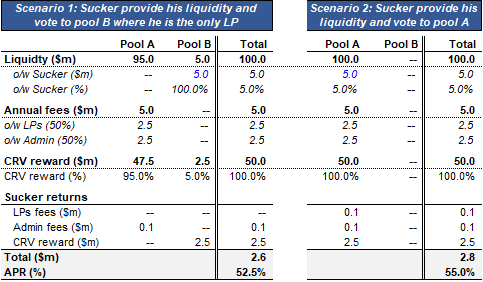