Agreed that double dipping shouldn’t be permitted. Hopefully Convex votes similarly since unfortunately Yearn has a vested interest in permitting this.

Also just to point out here: the copycat project should be pursued by Curve DAO to protect the rights of $veCRV holders. Those VCs have passthrough liability.

Well, the Market is free you are right and free to decide if anything is effective or not.

So what do you think free veCRV holder shall do??

now do the other pools too

edit: compiled some numbers from the UI. I think % reward compares the rate per liquidity fairly compared to their volume to liquidity.

alUSD pool does more work for less reward than most pools. 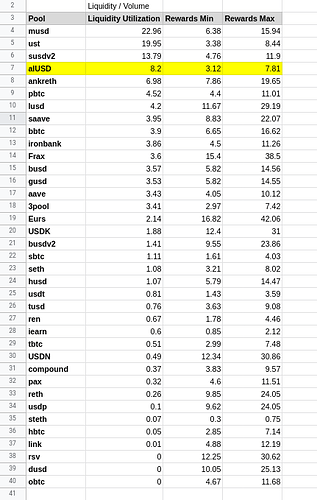 @BlockEnthusiast
@statelayer @CurveFinance just plucked some stats from the UI. alUSD has the 4th highest Liquidity Utilization, but the 29th highest min rewards. For reference higher LU Liquidity musd 12.6m ust 8.1m susd 243m alusd 63 m so quite a productive pool for them on its own
2 Likes
newyorkoo June 15, 2021, 5:57pm #14

These project parties did not buy CRV

All these pools are filled with large veCRV holders. Max deposit there per veCRV to have max boost: <0,04USD per veCRV

For alUSD it is 4USD per veCRV, nobody is just holding veCRV in alUSD pool.

No such thing as double-dipping. Curve incentivises liqudity by paying CRV per amount of liqudity provided. Projects like Alchemix or abracadabra essentially are leverage LPing Curve. They provide more liquidity, so they get more rewards. There is no double-dipping as they get their fair share of rewards based on how much liquidity they provide.

This is a reductionist way to look at an issue. This is why finance people cut everything when they compare two numbers and then wonder why their companies fall apart.

What is benefit of this pool has gauge bring to veCRV holders, could you please specify what do you mean?

the forth highest liquidity utilization out of all pools, and is bigger than two of the higher LU pools by 5-8X

Do you realize that veCRV holders can enjoy this LU without payback CRVs x7 amount of received LU fees. So why they won’t?

Yes. Do you realize the same could be said about every single pool, 33 pools come out with a worse justification.

Do you feel the gauge provides value? If not why do we have the gauge at all?

I personally do think the gauge provides value, but the main questions are:

Gauge gives benefits for LPs in the pool.

Answering in general,
Those metapools, who dump CRV 100% shall have gauge weight equal to their share of TVL/2 (their 3Pool part). That would be fair treatment and yes it is achievable by meaningful weight voting.

So lets say that we dont have a gauge for alUSD.

People could swap alUSD for DAI and provide to any gauge and double dip just as much. So long as you can borrow against a curve position you can leverage farm.

It wont be long until you can borrow against convex positions. This proposal does not accomplish anything regarding double dipping because the same amount of CRV rewards are released, and it doesn’t matter which pool is getting them as debt can be converted into any qualifying pools assets.

Who came out with this dumb idea? This is a bad precedence to set and was how TradFi failed in the first place. Can’t believe this actually made it to the proposal board.

Fail on that lol, why would anybody provide DAI for alUSD pool if there is no gauge rewards?

This is literally the purpose of proposal boards. No one gets to decide “this is a dumb idea, no vote for you!” If it’s a bad decision, then it is brought to light and we all benefit since we can all understand why it’s bad. And vice versa.

My faith in humanity has dropped slightly today just due to the number of people that are incensed that this is even up for discussion. This is literally the point of having governance set up this way.

If I can trade alUSD, then I can trade alUSD to an asset I can deposit in Curve. alUSD doesn’t even farm curve under the hood, the staked DAI in alchemix does. So I can stake DAI in Alchemix, earn from Curve. Borrow alUSD and trade for DAI, then stake that in a gauge.

Now, without holding any alUSD I’m double dipping CRV rewards. This proposal does nothing to dissuade that.

At the risk of going down a rabbit hole, how did TradFi fail that way?

We are a DAO and thus, users are free to comment and vote and we clearly raised an issue that resonates with the DAO judging by the replies here

What I’m saying, if there are no gauge CRV rewards on alUSD pool, then who will deposit DAI there to let you buy DAI w/ alUSD? Only those who will dump ALCX immediately.

I’d disagree because there is a guaranteed buyer 1:1 in the transmuter.
Any alUSD bought under $1 can be pretty instantly realized as profitable even without holding debt in the system.

And liquidity can be incentivized elsewhere as we are seeing with Saddle.

So lets take this Saddle example.

No liquidity on Curve, no gauge on Curve, liquidity will exist, users will be able to swap for alETH on saddle to ETH and then farm that ETH on Curve.

Are you saying you expect that no liquidity would form on any market under any circumstance for Alchemix products? If no, then there will be a way to double dip.