I’m in favor of this proposal. However, I think the “For” section above is a little misleading. Reducing the value of A for the pool will increase demand for DAI and the DAI price, so it doesn’t help DAI directly.

It helps reduce risk for Yearn, Maker and Curve by reducing the likelihood of the y pool not having enough DAI to withdraw if yETH needed to reduce its leverage. Still a great idea, just not sure about the explanation.

Here’s my take on what’s going on:

Since there seems to be a lot of conspiracy theories going on here, decided to publish a quick article on how the vaults actually work;

No, this change does not impact current functionality of yVaults, nor is it required. This will allow the curve ecosystem to have more DAI, and take away a current source of very cheap DAI, while this is definitely beneficial for both yETH and yearn, it is not a requirement, and yearn is not the only benefactor here.

The only point where it does impact is with less DAI, the vaults are less likely to pivot. Meaning that with current A, the vault is more likely to stay in curve.fi/y

There seems to be a lot of “anti-sentiment”. If you really want to get rid of yearn, the solution is simple;

Voting against this, will not allow more DAI, which will also further provide “cheap DAI” in this pool. Which will also force yVaults to stay longer since cheap DAI is more profitable. 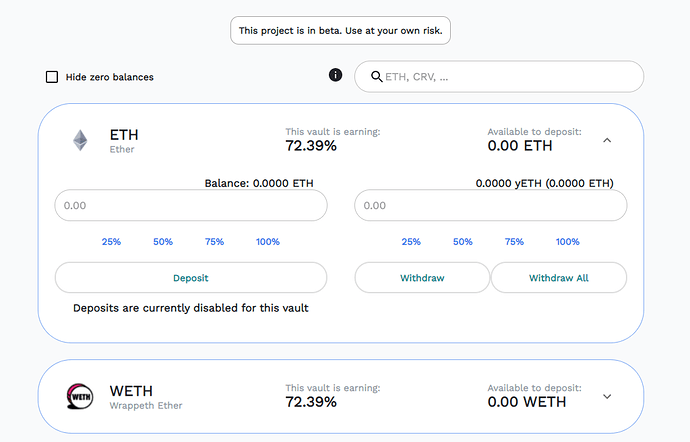 Quick primer on how the vaults work, as there seems to be quite a bit of misinformation currently going around.

I’m here from telegram and I don’t quite understand what is the need all out of a sudden for yEarn to change this parameter. From what I understand this proposal will allow yEarn to flood more DAI into the pool and farm more CRV, this is putting more sell pressure for CRV again.

good job. i will vote for.

I’m not sure if we have a really great explanation anywhere about how A works and influences the proportion of tokens in a pool. Why is the A in the y pool 2000, but sUSD pool is only 100?

Currently the pool proportion in y pool is like 2% DAI and in sUSD pool is 14%. Yikes, that’s a difference.

So my layman understand (and having seen it in practice) understanding of A is as follows;

So higher A is better when coins are at peg. Meaning with high A the pool assumes all the assets are as close to 1 as possible. Low A is the opposite.

So the high A of y pool, has essentially allowed arbitragers to keep getting DAI for 1, when in fact they should have been paying 1.01 ~ 1.02. So by bringing A lower, it makes DAI more expensive to buy. But, since y pool is incredibly low on DAI, it also makes DAI nice to sell to it. This will keep the pool more evenly spread between assets, which I generally think is positive for all LPs, will remove a source of cheap DAI from the market (good for DAI). And create a healthier balance of assets.

Normally we would not have noticed this, but given the large influx of DAI from yETH it became very apparent that we need to suggest a change, since as we expect more money to flow in, we will see this in other areas as well. An example is Binance adding USDT staking via curve. Their deposits will be one sided, if they were to use a lop sided pool (like y), they would have large slippage and this could set them off from using it in the future.

From my observation I think since curve is turning into almost a savings account / trade platform / stable coin meta basket, this change is important.

If you look at mStable for example, you can essentially assume A is 9999, this is why one side of the basket is often completely empty, and they are left with 1~2 assets. We want to prevent this and make the usage and adoption of yUSD (output LP token from y pool) more widely used and adopted.

Thanks a lot for taking the time to explain.

I (start) to understand that there is a general flaw of the y pool concerning DAI, because DAI “trades” too cheap once it is above peg, so it will always be drained and scarce.

I assume A can fix this? Would be nice if someone from curve would comment @charlie_eth @michwill @kendrickllama

On a general note, the need for discussion is not necessarily “anti-sentiment” or “anti-core”. I don’t like to see these silos formed. But, personally I need to know both sides to take decisions and thus often assume a devil’s advocate position for better understanding.

I hope you understand that you and YFI are a huge player and thus have to tread extra carefully if you don’t want people to feel pushed around. The fact that concern by CRV holders exists does not mean it cannot be resolved.

I would love if we could align the YFI and CRV community (because I am part of both) to leverage each others interests mutually.

I am with @andre.cronje here. IF we want to limit yearn’s access to curve we don’t need to use complicated second order mechanisms like pool parameters.

The better tool is to adjust the gauges for yearn.

Again: IF we would like to be protectionists. I believe it’s better to collaborate and find a sweet spot together.

Normally we would not have noticed this

I am using the yETH strategy since months and started off with only 3333 DAI in the y pool. I can confirm that what you describe became apparent even to me with such low amount. So after this discussion I will vote FOR.

On a somewhat unrelated, but related note, y pool has also become something closer to a stable savings account and meta stable coin for yearn and a lot of other communities. So having a more equally proportioned pool gives a lot more safety and security. We have been building and integrating a lot of solutions ontop of y specifically because till now, it served that purpose so well. I have no objections to all veCRV holders to vote for 0 CRV rewards for y pool, but I would like to keep using it as the defacto meta stable pool + savings account. And as we see more pools being added, such as dforce and idle, the arbitrage opportunities will increase. I would love to continue using y pool as the safety net we have been using it for since inception.

Thanks for the detailed reply Andre. I agree that low A factor will help keep the proportion of coins within y pool closer together (DAI would gain in share, USDT would drop in share) and am more sympathetic to your proposal.

However, I don’t think there’s ever been “cheap DAI”. Arbitrageurs are keeping the pools in line, just try each pool in turn.

While the A factor influences the bonus/slippage when swapping coins, the market still determines the price. The A factor helps control how far the DAI % of pool will drop before the bonus (to deposit DAI) or slippage (to withdraw DAI) kicks in enough to effectively match market price (~1.01 or ~1.02 recently).

If the A factor of y pool suddenly dropped to 100, there would be a sudden, brief advantage to deposit ~100m DAI and withdraw ~150m USDT to get bigger bonuses.

Helpful link for everyone: https://www.curve.fi/stableswap-paper.pdf search “amplification” it’s about 2 sentences.

I hardly agree with the @andre.cronje’s assumption. I couldn’t get the point that A helps the price of DAI to be pegged 1$.

There are lots of arbitrage in current market economy. If DAI’s price is 1.05$, market decides it valued as so, not Curve y pool. Less A is just deleverage the effective liquidity of pool, which gives more tolerance in large volume trade and less slippage cost. Nothing is related to the DAI price determination.

If DAI is valued higher than 1$, it is just because there are more demand and less supply of DAI. The price should be stabilized by MakerDAO (probably apply negative interest?), not here. Nothing we can do using AMM liquidity pool.

I totally agree with this. The modification of A just makes a chaos in this community. It eventually decreases the trust to Curve Finance. It is dangerous.

Although I am generally in favor of collaboration with Andre Cronje, I will be voting against this proposal.
Everyone is free to sell their earned CRV but I have no interest in helping make that process easier or in this case safer to do at a large scale. Growth of the yeth vault only pushes CRV price down and brings absolutely no LPs invested in the curve protocol success.
I want distributed CRV to end up in the hands of investors that could decide to hold it if incentivized properly, the vault does not offer that option at all.

I think this topic is quite important and should not be rushed into. There are multiple factors and risks to consider.

I would be in favour of discussing this topic first and then having a vote about potential solutions.

So the high A of y pool, has essentially allowed arbitragers to keep getting DAI for 1, when in fact they should have been paying 1.01 ~ 1.02. So by bringing A lower, it makes DAI more expensive to buy.

This is not correct. Higher A = more liquidity around 1, it doesn’t allow arbitrageurs to get DAI for a lower price, it means that there is not that much liquidity spread a bit further from 1.00 price point. Which is what yearn yETH vault is experiencing not being able to withdraw the DAI it deposited and return the loan if ETH price goes down too fast.

So it seems pretty clear now that the 2000 A is just too high. The y pool needs to be balanced as much as possible. 2% of the pool in DAI doesn’t cut it.

Can you clarify why the y pool A was raised to 2000 while sUSD is only 100? I think I remember Michael saying something about in the chat awhile back but we need to understand why we’re in this situation now.

Is there any negative side affect Of lowering A that hasn’t been covered here? Perhaps we should go more extreme than the proposed 1000 value, and reduce A to the same as sUSD pool? Thanks

Loss of virtual profits from this change ended up being -9% annualized. Immediately offset by CRV incentives.

Though there’s room to lower the A factor more.